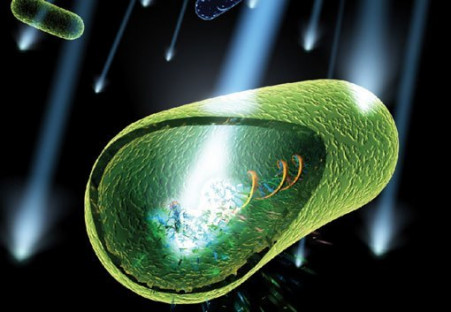 Ultraviolet light, ozone, photoplasma, and negatively-charged ions exists in Nature as powerful and effective disinfectants, perfectly designed to destroy odors, bacteria, viruses, mold, and mildew, and to break down unwanted chemicals and compounds.

BioZone's Disinfection Technology Solutions and products are enjoyed by millions to disinfect surfaces and air & improve the quality of life in homes and businesses all over the world.

Many of our patented solutions are amplifications and magnifications of the naturally-occuring phenomena of ultraviolet light, photoplasma, ozone, and photocatalytic oxidation.

Protect yourself against the Corona virus

The tests were performed by The Centre National de la Recherche Scientifique (CNRS, The National Scientific Research Centre under the authority of France's Ministry of Research ) in bio safety level 3 laboratory in Lyon, France - one of the World Health Organization (WHO) collaborative center for Avian and human influenza viruses.

Influenza strain A/Finch/England/2051/91 H5N2 (316.000.000 viruses/ml) was sprayed as an aerosol into an inlet leading into a purification chamber. The first samples were collected from the inlet before the aerosol entered the purification chamber. In the chamber the virus aerosol was subjected to UV light and photo plasma-based BioZoneTM technology for 0.44 seconds, after which the second samples were collected from the outlet. The concentration was then calculated using the “Reed and Muench” statistical method.

The tests show that BioZoneTM technology destroys the strain of H5N1 virus, reaching 5.7 logs (99.9998%) reduction rate in less than 0.44 seconds.

Ultraviolet light (UV) has been used safely for over a century to disinfect drinking water and sterilize air and surfaces.

BioZone Scientific’s ultraviolet lamps may employ one or more specific wavelengths of light as required by the application and intended use.

UV light is powerful enough to penetrate the cell walls of microorganisms and shatter the DNA, making it impossible for them to grow and reproduce.

HVAC disinfectant solutions which rely on UV light are proven to promote the following positive effects: 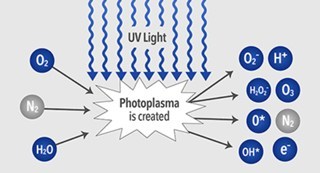 Plasma is the fourth state of matter, energized beyond solid, liquid, or gas. 99% of the matter found in the universe is in a plasma state.

Photoplasma can be found naturally and is often referred to as the “detergent” of the Earth’s atmosphere, due to its ability to break down many harmful pollutants. 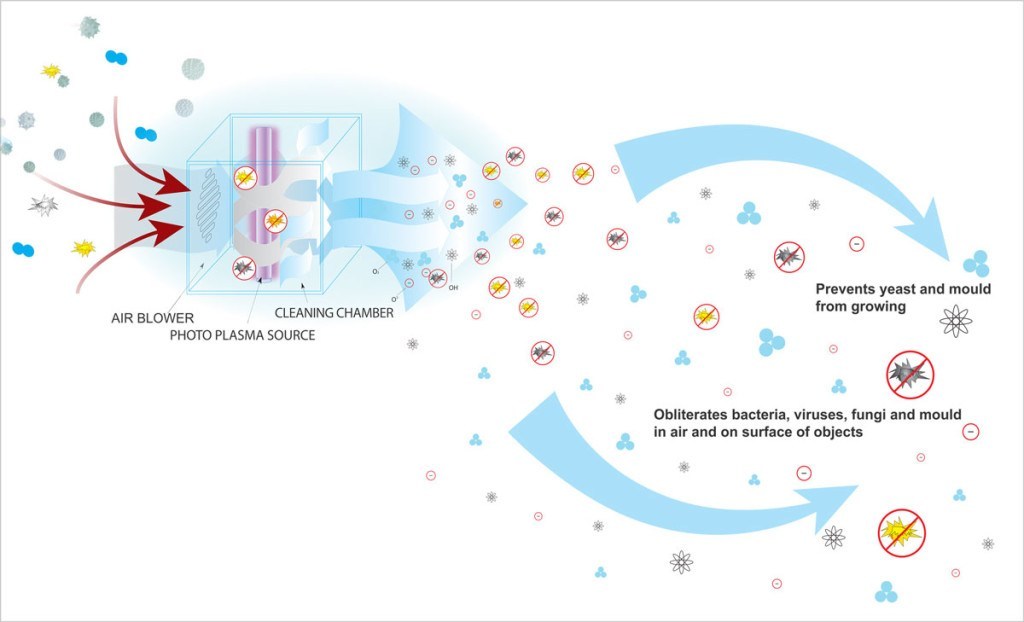 As true plasma-producing devices, BioZone solutions consume less energy, operate quickly, and are more effective than other solutions in the category.

BioZone’s patented technologies are recognized as among the most efficient and cost-effective methods known for producing photoplasma.

Photoplasma created by various BioZone products is a cocktail of highly-reactive oxygen-containing elements that are capable of destroying bacteria, viruses, mold, mildew, and odors and breaking down unwanted chemicals and compounds.

Ozone reduces the presence of germs, viruses, and mold.  It destroys VOC’s which cause unpleasant odors. 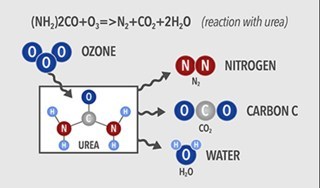 Ozone is a powerful oxidant found naturally in the environment.  It is created by the reaction of oxygen and UV light.

For more than a century, ozone has been used to safely disinfect drinking water.

Ozone can become an irritant in extremely high concentrations.

BioZone’spatented processes and methodologies are compliant with national and international ozone concentration guidelines. 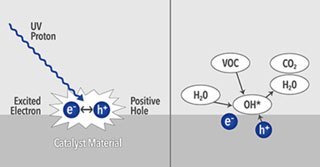 Photo Catalytic Oxidation, or PCO, is an advanced oxidation process that combines the power of deep UV light and a highly reactive metallic catalyst to accelerate photoreactions.

In the PCO process, the UV light’s energy reacts with the catalyst to create an energy gap that is used to generate free radicals, including hydroxyl radicals.

The radical species are highly reactive with organic compounds, and quickly and efficiently oxidize odors, bacteria, viruses, and harmful or unwanted chemicals.

Negative ions lower the concentration of harmful chemicals in the air by balancing the number of positive ions.

Ions are electrically charged particles that have either gained or lost electrons.

Negatively charged ions have an excess of electrons which gives them a net negative electric charge.

BioZone’s solutions may employ a negative ion generator to systematically attract multiple compounds in the air and bind them together to increase the yield of destruction of odor molecules, bacteria, viruses, and chemicals that are targeted by BioZone’s other technologies.

BioZone’s patented bipolar ionization technology increases the quantity of both positively and negatively charged ions to restore airborne concentrations closer to the levels found in nature and improving air quality as a result. 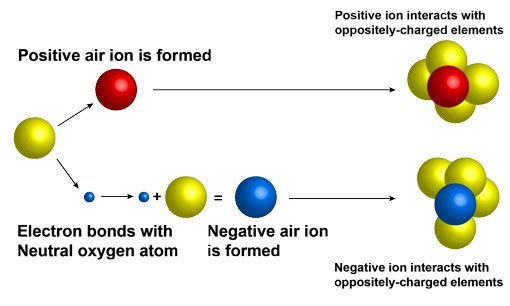 Positive and negative ions occur naturally in the air and are one of nature’s most efficient means of decreasing airborne contamination such as bacteria, viruses, and VOCs, and neutralizing odorous gases and aerosols.

Ion concentrations in the air around pristine natural settings such as waterfalls, the beach, or on mountain peaks can be measured in the range of 3,000 to 5,000 ions per cubic centimeter (ions/cc).

BioZone Scientific © 2022 Made by Ifonas AS